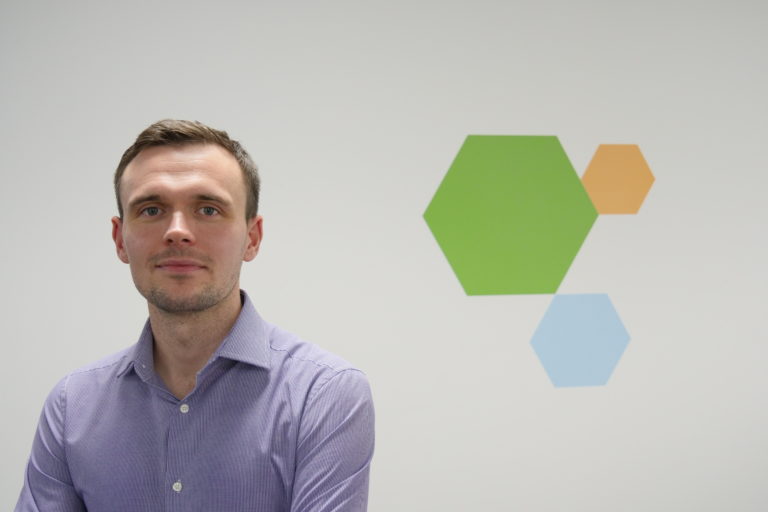 Last year, Ross Carrick took a leap of faith and left his full-time job to embark on an exciting new career in software. Now, five months into his role with Saggezza, the 31-year old is urging others to make a new start and follow their passions to change their lives.

Ross works at Sunderland Software Centre and is looking forward to his first full year in a role he describes as allowing him to be paid for doing something he loves.

This father of one joined Saggezza after hanging up his (steel-capped) boots from installing ceilings in commercial properties. Ross believes people should take action if they feel their current career path isn’t right for them.

“I liked my old job, but I felt it no longer challenged me. Despite that, I carried on and had no real plans to move on until – as part of that job – I decided to build a complex time-tracking spreadsheet.

“At first, I was just playing around with it, trying to get it to meet the needs of the business, but I was quickly hooked. I started reading about building software – developing – and it became my passion. I loved the problem-solving aspect of it. I knew a career in software would challenge me and keep me excited every day.”

With that, Ross embarked on a Foundation Degree with Newcastle College, studying part time while carrying on with his job in construction.

“It was tough, but I knew if I wanted to pursue a career in tech, I needed to give myself a good grounding. The course gave me that.”

It was during his time with Newcastle College that Ross became aware of a job opening with Saggezza.

Saggezza supports clients to utilise technology to increase their efficiency. They have offices in India, the US and London, and opened a Sunderland office in 2014. Now employing some 50 people from its Sunderland base, Saggezza is attracting more and more clients who want to take advantage of new and emerging digital technologies to increase their bottom line.

“Saggezza advertised for a graduate-level appointment. I attended one of the company’s open days to find out more about it, and was told by the team that they would be open to looking at my CV. I thought, ‘This is the kind of company I would like to work for.’ A company that treats people as individuals – that recognises everyone is different, and that they’re more than just a qualification.

“I applied, but was up against people with full honours degrees, but I was amazed when I got it. I was really grateful Saggezza recognised just how eager I was to make the move into software. I don’t think many – or any – other businesses would have given me that opportunity.”

Since joining the company, Ross has taken part in a training programme to ensure he has the skills to succeed in tech, and understands the way that Saggezza works.

“The training I received up front was better than any training I have had. I felt totally ready to begin my role and can see the progress I have made already, which is fantastic after a relatively short amount of time.”

Just weeks after joining the company, Ross was trusted to get started on his first real project, which he delivered with a colleague.

“I worked on a campaign for a global fashion brand, which is pretty exciting, and was able to do the developer side of the job as well as the client liaison. You’re really trusted to get on with things and that’s something I really enjoy.

“It’s a really trusting, open environment. Our MD stops by often and chats, and the company is really receptive to hearing ideas and putting them in place if they will improve the business. It’s been an amazing move for me and one I am so pleased I made. My wife even says she can see a big difference in me. I am just happier when I get in, because I really enjoy work.

“I don’t think of work as ‘work’ anymore. It’s a chance to do something I love and the fact I get paid for it is brilliant. I feel very privileged. I’d say to anyone who is in the position I was in previously to just go for it. Don’t waste any time. If there is something you know will make you happy, do it. You won’t regret it.”

How the Pandemic Will Shape UX: 2021 and Beyond

The COVID-19 pandemic disrupted almost every system we rely on, drastically changing our behavior in every sphere of our lives. […]

“The Entrepreneurs of Saggezza” features the unique journeys Saggezzians have taken in their careers. Each tells a compelling story of […]