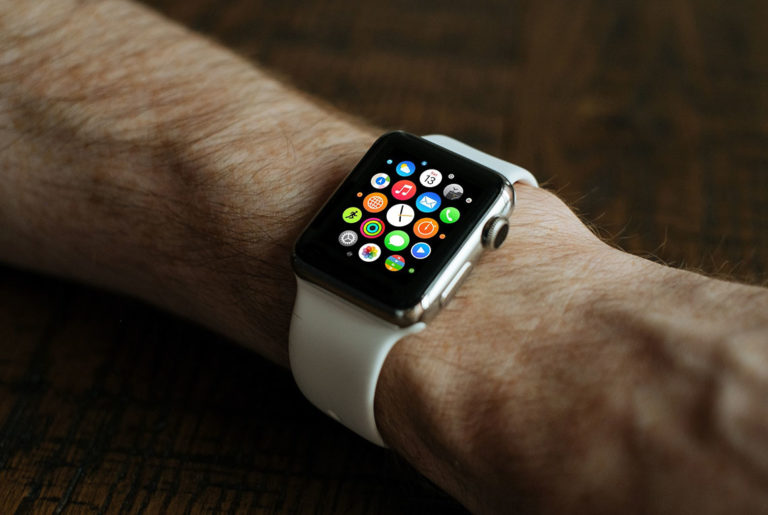 From Databank to Glass: The Amazing History of Wearable Tech

The term “wearable technology” may still bring to mind the kind of high-tech gadgets Q designs for James Bond.

But “wearables” are no longer confined to science fiction – they are gaining real mainstream momentum. ABI Research estimates 485 million wearable devices will ship in 2018 (up from 14 million in 2011), and IHS forecasts that wearables will eventually become a $30 billion dollar industry.

This explosive growth comes from mass markets finally taking notice of the increasing practical uses of wearables, and also how they are becoming less noticeable. We are likely very near the tipping point.

1960: the origins of wearable tech

The concept of wearable technology dates back to 1960, when Manfred Clynes coined the word cyborg in his short storyCyborgs in Space. Back then, wearables truly were a figment of imagination.

Imagination quickly escalated to crude reality, though, when Ed Thorpe and Claude Shannon announced their invention of the first wearable computer; a small, four-button device strapped around the waist with toe and earpieces used to predict roulette wheels.

The device gave Thorpe an edge in casinos, but the Achilles heel was its visibility, as the earpiece was clearly noticeable. Progress continued over the next decade, but no really significant developments took place until the 80s and 90s.

The most famous of these is probably Mann’s Eyetap; a two-way camera worn in front of one eye. If this sounds familiar, the version that Mann produced in 1999 looks strikingly similar to Google Glass.

Steve Mann was never able to capture mass market appeal, however, as his devices were often clunky and difficult to use. This isn’t unusual, as very few wearable devices truly go viral. The first device to do so had a surprisingly simple purpose.

As the watch technology improved and other companies entered the market, prices dropped and supply soared. Casio was considered the biggest player by the mid-80’s, with its flagship Databank series.

Beyond their calculator functions, these watches also stored appointments, names, addresses and phone numbers. The amount of information they stored was revolutionary, and for a time the Databank was highly fashionable (Police lead singer Sting wore one in the video for Wrapped Around Your Finger).

The hype caused a feature war between companies trying to one-up each other. Consumers benefited as they rapidly had access to technology in a way they had never experienced.

But as the hype dwindled, calculator watches became a fashion faux pas. Today, the only celebrities still wearing them are Dwight Schrute from The Officeand nerdy Walter White in early seasons ofBreaking Bad. Yet the calculator watch stands as a true, early example of wearable success.

Another major wearable with its roots in the 80’s is the fitness tracker; the decade saw the first wearable heart rate monitor for athletes. By the 1990’s, cyclists could buy devices smaller than the size of a fist that monitored speed, distance and other variables.

After a period of limited progress, fitness trackers brought wearables to the fore again in the late 2000’s. Today’s fitness trackers are slimline devices that capture meaningful data that was previously unavailable to the average consumer. They’re currently the most popular wearables, making up 61% of wearable device sales in 2013.

Research firm Current Analysis dubbed 2013 the “Year of the Smartwatch,” as device components have become “small enough and cheap enough” to grab the attention of the average consumer.

Smartwatch sales are picking up as more models come on to the market. The Kickstarter-launched Pebble watch took 275,000 pre-orders and shipped 93,000 units just in the first half of 2013. From that impressive start, BI Intelligence forecasts that global smartwatch sales will reach a whopping 91.6 million in 2018.

Smartwatches have mass market potential because they are relatively unobtrusive; simply replacing the current wristwatch that about half of the global population still wears.

Modern smartwatches are far more sophisticated than the calculator watches of the 1980’s. The Neptune Pine, released in March 2014, is a full-fledged wrist-mounted computer with most of the functionality of a top-notch smartphone – yet it’s still not much larger than a standard wristwatch.

The smartwatch could well be the device that ignites the wearables craze so many analysts are predicting.

Google’s much-hyped “Project Glass” (now officially Google Glass) has been gaining momentum since 2012. Glass differs from other wearables as it is a forward-thinking device.

Since Steve Mann and his colleagues started wearing clunky goggles attached to giant backpack computers, techies the world over have been waiting for the consumer friendly version. Glass may not (yet) be the answer we’ve been waiting for, but even moderate success could pave the way to the human-to-cyborg integration that’s been in our collective imagination since the 60’s.

Imagine walking down the street and seeing ads as you glance at a storefront, or focusing on a familiar face and seeing a transcript of your last conversation. Google Glass is not trying to be that product yet. According to Google X lead Sebastian Thrun, “the compelling use case for us is the sharing experience.”

Glass is less focused on what is happening in front of you, but rather allows you to connect to social networks and the cloud. Nevertheless, it isn’t hard to see how Google or a competitor could go on to launch a true cyborg-like product down the road. The future has never felt so close.

Wearable technology has come a long way since the 80’s. It’s no longer the exploding pen in a James Bond movie; it’s the $100 wristband that tracks how many miles you ran, GPS technology that vibrates in your shoes when you need to turn, or the waist band that alerts you when you slouch.

There’s a long way to go, but wearable technology is developing at a fantastic rate and in a fantastic variety of ways. Welcome to the era of the cyborg.

Dustin joined Saggezza in 2009 focusing on print and logistics organizations.  Since 2016, he has partnered with private equity firm owned companies in the middle market space to lead digital transformations.  He has rebuilt three dot-coms to achieve a stronger customer focus through social integration and drive a 360-degree view of the customer.

Saggezza Partners with Snowflake to Bring Data Warehousing to the Cloud